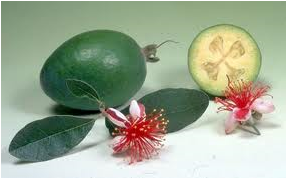 In the following weeks you’ll be seeing South Gippsland farmer, Paul Haar’s feijoas appearing in your box – these delicious egg sized fruits are in season for the next 6 weeks and are relatives of the guava family. The fruit, which is very popular in New Zealand, is usually eaten by cutting it in half, then scooping out the pulp with a spoon. The fruit has a juicy, sweet seed pulp and slightly gritty flesh nearer the skin. If the utensils needed to eat it this way are not available, the feijoa may be torn or bitten in half, and the contents squeezed out and consumed. An alternative method is to bite the end off and then tear the fruit in half length ways, exposing a larger surface with less curvature and using one’s teeth to scrape the pulp out closer to the skin.

A feijoa may be used as an interesting addition to a fruit smoothie, and may be used to make wine or cider and feijoa-infused vodka. The flavour is aromatic, very strong and complex, inviting comparison with guava, strawberry, pineapple, and often containing a faint wintergreen-like aftertaste. It also may be cooked and used in dishes where one would use stewed fruit. It is a popular ingredient in chutney.

Fruit maturity is not always apparent visually, as the fruits remain the same shade of green until they are overripe or rotting. One usually may sense ripeness, however, by giving the fruit a soft squeeze; a ripe feijoa will yield to pressure somewhat like a just-ripe banana.