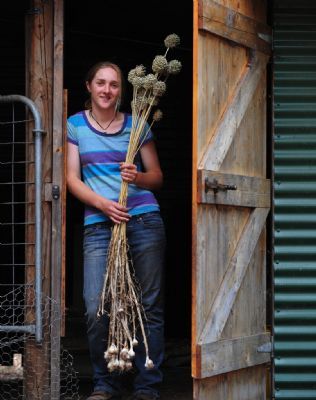 MADELINE Watts has turned her back on convention and now knows just where she’s headed.

In 2008, Madeline Watts faced the same problem thousands of Year 12 students face at the end of the year.

“I did really well at school and was under pressure to use the score I got to do something, but I just didn’t know what,” says Madeline, whose VCE score placed her in the top 7 per cent of students.

“At school, we were all taught that if you don’t go to uni you are a loser. The teachers don’t do it deliberately, but we were all fed the same thing – if you don’t have that degree, you can’t do anything.

“I didn’t want to end up a nobody, so I started uni, but I realised it wasn’t for me. I learnt that you don’t have to go to uni. There are other options out there.”

That option has turned out to be garlic.

In 2009, Madeline was living at home with her parents, Chris, a civil engineer and Christine, a children’s book author, and her younger sisters, Talsy, now 18, and Jaklan, now 16, on their 15-hectare property at Eagle Point near Bairnsdale in East Gippsland.

“I started a Bachelor of Ecological Agriculture through Charles Sturt University, which was the most alternative agriculture degree available, but it was still too mainstream for what I believed in,” she says.

After finishing the first year of her degree, Madeline signed up as a Wwoofer – a Willing Worker On Organic Farms. 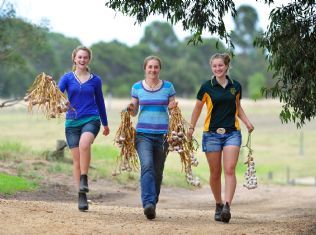 She headed to King Island where she worked on a garlic farm.

“I was always thinking, ‘what am I going to do?’ and when I saw the garlic I thought, ‘I could do this’.”

Madeline returned to the family farm with a plan.

“We are really into self-sufficiency, we eat all organic food and most of what we eat we produce ourselves, so basically the garlic was just an extension of that.”

“We had to source seed which proved to be a big problem,” Madeline says. “I wasn’t prepared to buy conventional seed. It had to be certified organic or from producers I knew and trusted.”

Madeline bought seed from the King Island farm where she worked, as well as from Tasmania and closer to home at Bruthen. She bought 80kg of seed and planted it on about 1000 square metres.

“I had to do a crash-course in growing garlic,” she says. “I did research, spoke to other growers and then we learnt while we were doing it.”

Madeline’s father, Chris, is a civil engineer and proved pivotal to the project, especially when it came time to build the beds and harvest the garlic.

“Dad made the bed-builder,” Madeline says. “He designed it and a welder made it. It took a few goes to get it right and a few mad-rush adjustments, but then we were right to go.”

Chris’s expertise was called on again at harvest time.

“The harvester is another contraption Dad made,” Madeline says.

“It’s a blade behind the tractor which goes about 5cm underneath the bulbs to loosen the soil and cut the roots. Then we come along and pull the garlic out by hand. Dad’s good with that sort of stuff.”

“We wanted to get into gourmet varieties, ones that are good yielding, and all different colours so they are appealing. The different varieties mature at different times so we were harvesting for about one month.”

She sold garlic to a greengrocers in Sale and Bullant Brewery in Bruthen, as well as at a couple of local farmers’ markets, including Metung and Paynesville.

The garlic is sold for $25 a kilogram. “We can’t sell it too much cheaper than that,” Madeline says. “Some people baulk at it, but we think people should be paid fairly and we believe it’s a fair price. We aren’t ripping people off and we aren’t cutting ourselves short either. We’ve had good feedback so far.”

The Watts recently bought another property at Murrindal, near Buchan – eight hectares of riverflat land on the Murrindal river, and 16 hectares of bush.

“Garlic has to be on a three-year rotation – you can’t grow it on the same land two years in a row,” Madeline says.

“We are working on having at least two years’ rest to avoid any problems. The new property is perfect for what we need.”

This year, Madeline and her family have planted 200kg of garlic seed and have also discovered a 100-year-old heritage elephant garlic growing wild on their new property.

The Watts have also planted a trial plot of hops and saffron.

“Dad likes beer and brewing his own, so he thought he might try to grow his own hops. We have a local brewery and they are keen to buy fresh local hops. We are trying to do things that other people aren’t doing.”

The business, Blue Sky Organics, is in its early days.

“We didn’t break even last year, but fingers crossed we will this year and then next year we will keep improving. And hopefully once the hops and saffron come into play they will help.” 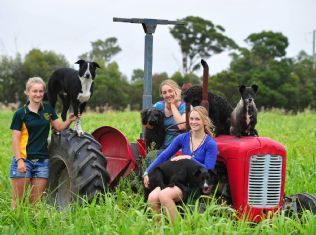 The Watts are in the process of having both properties certified organic which is also keeping Madeline busy. “I struggle a bit with the marketing side of the business,” she says.

“That has been tricky, but I really enjoy getting out there and doing it. We want to sell direct as much as possible, so an on-line presence is also really important.”

Madeline stopped studying at Charles Sturt University last year and is now studying a Diploma of Agriculture at Farmtech in Sale, specialising in organics, study which is helping her with the process of organic certification.

When not studying or working on the farm, she works part time for her father’s engineering business.

“People tried to tell me I should become a vet or a doctor, but, if I wanted to be happy and live a happy life, I couldn’t do that. They say if you love what you do, you’ll never work a day in your life.

“This way, I can work my own hours, work longer days or have a break when I want. I’m definitely happy now.”