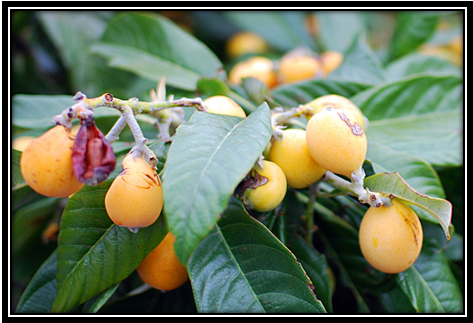 I was walking home from the shop the other day and I was really excited to spy the first ripe loquats on a tree hanging over a front fence.  I grabbed a few and shared them with my son who got through a half a one before he used it for target practice on an old pc monitor lying on the nature strip.   Now loquats are nicely tart and have lots of juice, they even have one of the most beautiful looking pips going around but they ain’t no white peach.  What I was really excited about was seeing the first of the summer fruit and loquats are always the first , which means, soon we’ll be eating apricots, plums, peaches, nectarines and cherries not to mention new seasons apples and pears!  Last week at the Footscray market I saw the first organic peaches of the year; they’d been brought down from an orchard in Swan Hill hoping to get a good price at the start of the season – they were hard, pale and not much bigger than golf balls but they were definitely peaches.  So hold on Fair Fooders, we know our boxes are showing the gaps in the season with apples and kiwi finishing up but over the next few weeks it’ll all be forgotten with the first bite into that sweet stone fruit.  Oh, and in the meantime pass the time with some local strawberries; there’s lots around at the moment, perhaps there’s a punnet in your box this week.