Julia Gillard is absolutely right that Australia is on the brink of becoming the global economic superpower as the economies of Europe and the US falter, dip, double-dip and recede in the wake of the rampant consumerism of the eighties, nineties and noughties.

The shift has already happened, it is just the global consciousness that needs to catch up. Gillard is also correct in her prediction that Australia has the potential to be the food bowl of Australasia.

The potential is there, but the reality is that federal and state governments are going to have to markedly shift their attitudes, funding allocations and support for farmers if Australia is ever going to be anything other than a dust bowl importing all its food from Asia. That’s the way we’re headed.

Farmers are leaving the land in droves, frustrated with government treatment of rural communities and the right of farmers to earn a living wage for the crucial food production and custodianship of the land they battle the elements for every day. The age of the average Australian farmer is ever increasing (currently around 65 years of age) and the industry is not attracting newcomers (except Asian and other overseas purchasers). The children are leaving the land in preference for fringe dwelling – who can blame them when the rural schools are being closed, the Coles/Woolworths price wars and market domination demand ever-lower farmgate prices for produce, the satellite signal for broadband is slower than the city peak hour crawl and we can’t get a TV or radio signal, let alone a doctor, a post office, a store.

It’s a great sound bite, Julia, but come out into rural Australia and get the real picture. There is so much to love and nurture – the platypus, koalas, wallabies and pristine waterways and rainforest gullies as well as the cattle, the native grasses and trees. But there is also much to fear – the fracking which is nonsensical on the driest continent on earth. Poisoning our underground and inland waterways will destroy all our unique native wildlife, our land, our crops, our animals. Once it’s gone, it’s gone forever. The mining and exploration licences over great swathes of the most fertile and abundant food producing land in the country. The right of miners and government to grasp the land we nurture and savour every day in order to fulfil some short-term greed and perceived need that history will damn us for. The fact that though we raise our voices, we are a whisper not a roar, and who hears us anyway above the city sirens, circling traffic and power suited pontifications of Canberra? 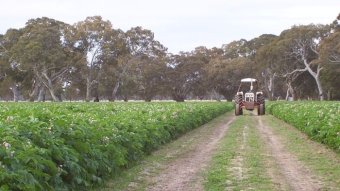 We don’t need to keep raping and pillaging and poisoning this great land of ours. We have to stop industrialised farming which clears great tracts of land and then seeds it, poisons it and starts again. We don’t want or need GM anything, we need to stop and think about what sort of food we want in our bodies, what sort of custodians of the land we want to be, what sort of land we want to leave to our children and their children. We need to work with the land and the seasons and the natural rhythms of life. We need to become a global leader in renewable energy harvesting and consign the coal seam gas pioneers to the history books. We need to reward farmers, believe them, trust them, stand up for them, work with them, help them to produce ever more nutritious food for our brains and bodies and thank them for what they do 365 days a year (there’s no such thing as a day off or a holiday on a farm).

Gillard’s prediction can come true, but first we need to go cap in hand to the farmers and find out what it means to produce food in this country, how to do it better, how to harness the healing nature of the land to produce real food, not chemical cocktails which might fill the plate but who knows what they are really doing to our bodies.

This is the Year of the Farmer, let’s listen to them, get down on our knees to them, hear them, help them and secure a food future for Australians and their Asian neighbours. Please, before every morsel on the supermarket shelves has done more globetrotting than even the most ambitious grey nomad, and Australian farms and farmers have bitten the dust.

Sophie Love is a farmer, marketer and writer. She can be found online at www.littlehouseontheriver.com.au.